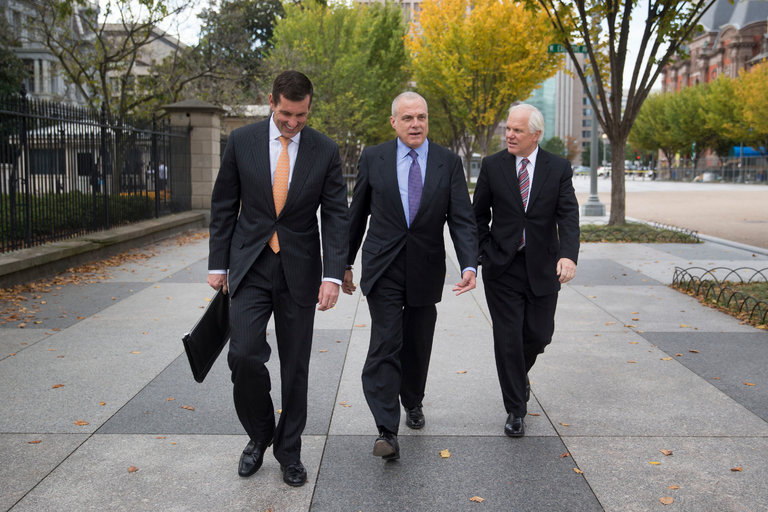 The proposed health insurance mega-merger between Anthem and Cignaheads to court on Monday, as the companies face off against a Justice Department seeking to block their $48 billion deal. It will be followed in just a few weeks by the trial for another proposed insurance mega-merger, between Aetna and Humana.

Together, those two mergers would remake the industry, resulting in the nation’s five largest health insurers shrinking to just three, including UnitedHealth Group, which remains independent. And the Justice Department is set to argue that the consolidation would be bad for consumers.

“If these mergers were to take place, the competition among insurers that has pushed them to provide lower premiums, higher-quality care and better benefits would be eliminated,” Attorney General Loretta E. Lynch said in July when she announced the government’s decision to challenge these mergers.

But the election of Donald J. Trump could recalibrate how vigorously the federal government handles these two deals, as well as the many other deals now taking place in health care, according to legal experts. On Friday, Mr. Trump nominated Senator Jeff Sessions, the conservative Republican from Alabama, to replace Ms. Lynch. While it is unclear how Mr. Sessions would have the department handle antitrust cases, Mr. Trump has said that he wants less government regulation of business.

In each of the two big cases headed to court, a federal judge will decide whether consumers would be worse off after the mergers take place. The companies contend people would benefit because a bigger company would be more efficient and better able to strike deals with hospitals and doctors that result in lower prices for medical care. In its pretrial brief, Anthem argues the government’s opposition threatens to “deprive American consumers of lower health care costs.”

The insurance deals were the culmination of a deal frenzy that took place in which the giant for-profit companies were desperate not to be left behind if the biggest companies got even bigger. All four companies involved in the mergers say they are committed, although the relationship between Anthem and Cigna has been fraught. The two have accused each other of breaching the merger agreement.

Any fallout from the election would almost certainly not be felt immediately. Both cases are expected to be decided before Mr. Trump takes office in January.

But a Trump administration could still have a major say, particularly if either the companies or the government decide to appeal the initial decision.

There is little expectation that the Justice Department under the Trump administration would drop the case if the companies lost and appealed, for example, but it might be inclined to strike a settlement less onerous to the insurer. After the department under President Bill Clinton won its antitrust case against Microsoft, the officials taking over for President George W. Bush pursued a settlement that many viewed as less far-reaching than one that would have been sought by their predecessors.

There is also a distinct chance, antitrust experts said, that the approach to health care mergers will not pivot much from the current one.

“There is a history of bipartisan support for antitrust enforcement in health care,” said Leslie C. Overton, a partner at Alston & Bird and a former Justice Department official. “I don’t think we should expect a wholesale shift, based on the change from Democratic to Republican.”

The clearest sign of the new administration’s position, antitrust experts said, will come from who is appointed to crucial positions at the Justice Department and the Federal Trade Commission.

Other parts of the health care industry will also be on the lookout for any shift in stance. Hospital mergers, for example, have been aggressively challenged by the F.T.C. Last week, two large Chicago-area health systems, Advocate Health Care and NorthShore University HealthSystem, said they would continue their legal fight after an appeals court sent the case brought by the commission back to a lower court.

The F.T.C.’s position on the health care deals may change less than the Justice Department’s. The commission, an independent agency that includes both Republicans and Democrats, is somewhat less subject to the political preferences of the White House. But priorities often do change.

“The swings from administration to administration have not been as strong as they have in the Justice Department,” said Michael J. Perry, a former lawyer for the F.T.C. who is now a partner at Baker Botts. The agency has a long history of pursuing hospital mergers, he said, and “has a lot of success” in its attempts to block various deals.

In any event, few expect the deal-making that has taken place in recent years to abate. Hospitals have joined with other hospitals and bought physician practices, surgery centers and the like to bulk up. Last month, two of the nation’s largest nonprofit health systems, Catholic Health Initiatives and Dignity Health, said they were in talks to join forces.

Even among smaller insurers, mergers are likely to continue. This month, WellCare Health Plans announced its intention to buy Universal American, a smaller insurer, as a way to expand its presence in the private MedicareAdvantage market.

Although the federal health care law that was passed under President Obama, which prodded both insurers and health systems to deliver less-expensive medical care, encouraged some of the merger activity, many of these entities were likely to combine anyway. “We’re in the middle of a global merger wave,” said Martin S. Gaynor, an antitrust expert at Carnegie Mellon University.

The possible repeal of the Affordable Care Act, which many Republicans are pushing, is unlikely to change those dynamics. Hospitals may feel more pressure to join forces as a way of coping with what many people think will be a difficult environment. Government programs like Medicare and Medicaid could become less generous with their payments, and hospitals may experience an increase in the number of patients who have no insurance.

What’s more, health systems need access to capital to pay for sophisticated computer systems, and insurers, hospitals and doctors prefer the negotiating clout that comes with being bigger.

Hospitals are likely to see the divide between winners and losers grow, said Dr. Sanjay B. Saxena, a partner at the Boston Consulting Group, whose clients include health systems and insurers.